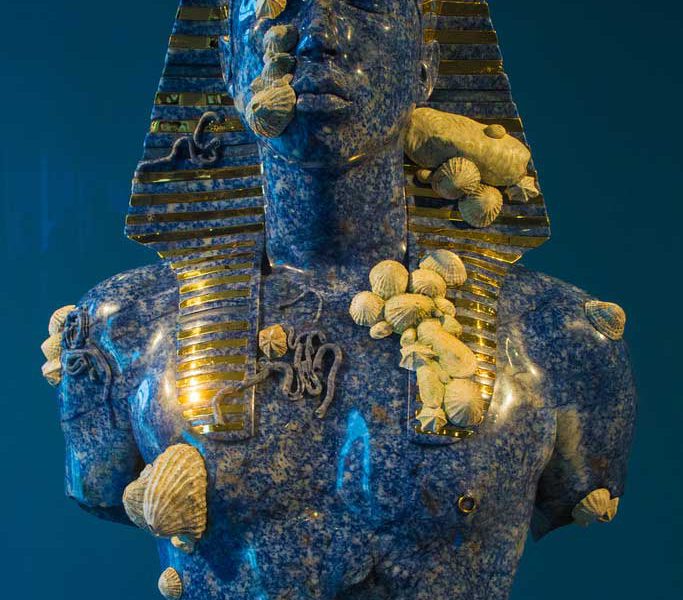 Damien Hirst: Treasures from the Wreck of the Unbelievable

Open until December 3, 2017, Treasures from the Wreck of the Unbelievable is Damien Hirst’s colossal exhibit that was curated by Elena Geuna in Venice’s Palazzo Grassi and Punta della Dogana. This is the first time that both exhibition spaces jointly host the works of one living artist.

The British sculptor has been working at this exhibition for ten years. The event had been highly anticipated by audience and critics since 2004, when the Museum of Archeology in Naples, Italy hosted his retrospective The Agony and Ecstasy. In 2007, the artist’s famous platinum cast of an 18th-century human skull encrusted with 8,601 diamonds, For The Love Of God, was sold for the mind-blowing price of £50 million. The following year, Damien Hirst worked around the galleries’ traditional mediation role and sold the whole Beautiful Inside My Head Forever serie, directly at Sotheby’s. The auction had a record-breaking success that earned Hirst £111 million-worth proceeds. Furthermore, the timing happened to be perfect, as the auction took place on the day Lehman Brothers filed for bankruptcy, triggering off the world’s worst economic crisis in living memory.

Born in Bristol, UK in 1965, by the late Eighties Damien Hirst, as well as Tracey Emin, was a leader of Young British Artists. Since the Nineties, as the provocative magnificence of his creations emerged and the co-founder of one of the main communications and advertising agency networks, Charles Saatchi, championed him, Damien Hirst has been one of the most controversial artists.

Before Treasures from the Wreck of the Unbelievable was mounted, little information had leaked out regarding the exhibit; in fact, some clips and pictures showing enigmatic underwater figures were all that had seeped through. Until Catherine Mayer of the Financial Times wrote an article in which she revealed she had taken part to a mission off the East Africa coast to salvage sunken objects that had been found aboard a mysterious shipwreck from the I-II century A.D., named The Unbelievable.

The vessel used to belong to a slave of the Roman Empire who had made a big fortune. What is currently on exhibition is the sunken treasure, still covered in heavy marine incrustations: necklaces, bracelets, pins, rings, hair clips and more jewels made of gold, lapis lazuli, coral, crystal and pink marble. Hirst applied all these objects on giant Chinese, Greek, Aztec, Roman and Egyptian sculptures, amphoras, busts and animal skulls. Human figures wearing tie have been placed next to Egyptian gods, Greek divinities beside fantasy characters such as The Transformers, Mowgli and Mickey Mouse.

Authenticity of the items is still in doubt and so is the very origin of the vessel and the sunken treasure. In fact, Damien Hirst leverages doubt and irony to provoke the audience: a spatio-temporal reinvention that raises questions on what is real as opposed to what is fake – what is authenticity and, conversely, what is reproduction.