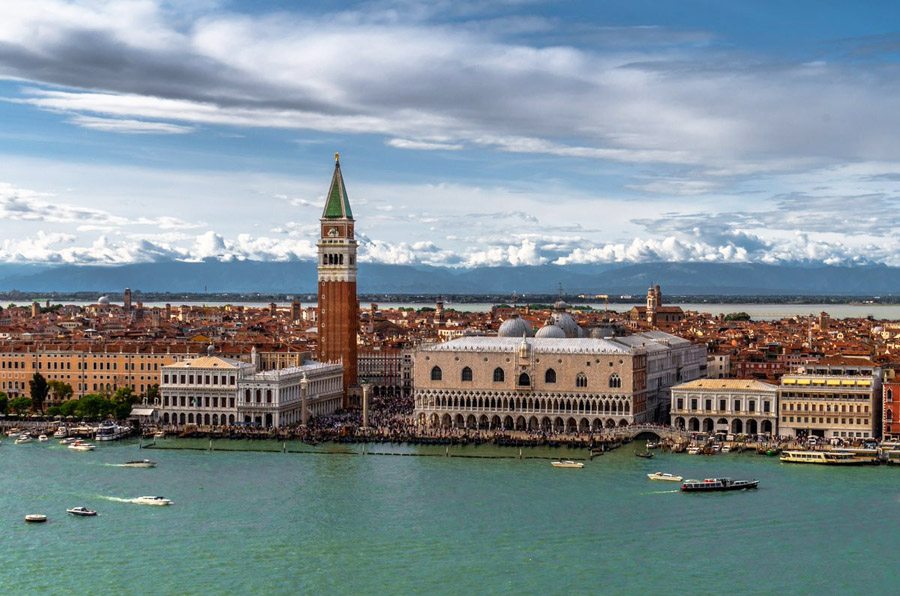 Venice from above: the best vantage points.

Today we would like to suggest you three places from where you can admire Venice from above and not just explore its calli, campi and piazze. Venice from above is truly a fish-shaped spectacle. So let’s change point of view and take home breathtaking views and panoramas.

Certainly one of the most beautiful views of Venice is offered by St Mark’s Campanile. Almost 99 metres high, it is one of the tallest bell towers in Italy and the main monument in Venice, so much so that the Venetians affectionately call it “el paron de casa” (the master of the house). It consists of no less than 5 bells, each of which had different functions in times of the Republic: the “Marangona”, the largest, which rang at the beginning and end of the working day; the “Malefico”, which announced death sentences; the “Nona”, which rang strictly at nine o’clock; the “Trottiera”, which was used to gather the members of the Maggior Consiglio; and finally the “Mezza Terza”, which announced a session of the Senate. From the top of the tower you can see the best sights of the lagoon: St Mark’s Basilica, the Salute Church, St George’s and, if the weather is fine, the nearby islands including Murano.

Have you already heard of the Scala del Bovolo? A hidden jewel that is just a few steps away from us near Campo Manin. Palazzo Contarini del Bovolo, once owned by the powerful patrician Contarini family who, in the fourteenth century, even had the honour of having given a doge to the Serenissima, has a unique spiral staircase (“bovolo” in Venetian) consisting of 80 steps.

Arriving at the panoramic terrace you have a 360° view of the city. Moreover, the loggia on the second floor of the Scala del Bovolo leads to a prestigious room of Palazzo Contarini (Sala del Tintoretto) where works of the most illustrious protagonists of the Venetian artistic scene between the 16th and 18th centuries are exhibited.

Another small jewel of the lagoon: the island of San Giorgio Maggiore. A magical and silent place, far from the tourist routes, with an ancient and troubled history. A former Benedictine convent, it later became a prison and then a weapons depot, factory and military district.
Don’t be fooled by the small size of the island because it is actually a treasure trove of history, art and culture…

If you want an unbeatable view of Venice and its lagoon, just climb up the bell tower. The view from up there embraces the whole city without the need for special effects. Here, at a height of 75 metres, you can see the geometry of the Doge’s Palace, the skyline of Riva degli Schiavoni, the island of Giudecca, Punta della Dogana and other remote but equally fascinating islands.

All you have to do is arm yourself with a camera and capture these marvellous views!